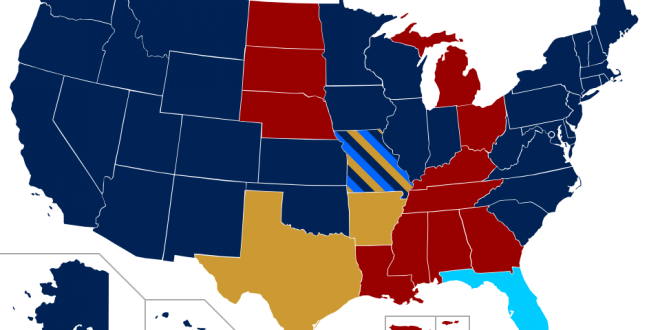 Not only has South Carolina joined the states displaying our favorite color, Wikipedia’s marriage monitors have decided to remove the red stripes of shame from Kansas even though most counties continue to withhold marriage licenses and state agencies continue to refuse to recognize the marriages that have taken place.

Gov. Sam Brownback’s administration will not make any policy changes to recognize same-sex couples while it defends the Kansas’ gay marriage ban against a federal lawsuit filed by the American Civil Liberties Union, Brownback spokeswoman Eileen Hawley said Wednesday. Hawley said all state agencies would “take the necessary legal actions once this issue is resolved.” The U.S. Supreme Court said the state can’t enforce its ban on same-sex marriages while the ACLU lawsuit proceeds through the courts. Some Kansas counties are issuing marriage licenses to same-sex couples, but others are not.

The agencies’ refusal to recognize the marriages will prevent couples from changing their names on their driver’s licenses and could affect such things as state income tax filings, The Wichita Eagle reported. “There are still cases under appeal in the courts, and the department will not do anything different until those are resolved,” Department of Revenue spokeswoman Jeannine Koranda wrote in an e-mail. A Lawrence couple who were married Tuesday said they were turned away from a Department of Revenue office when one of them tried to change her last name on her driver’s license.