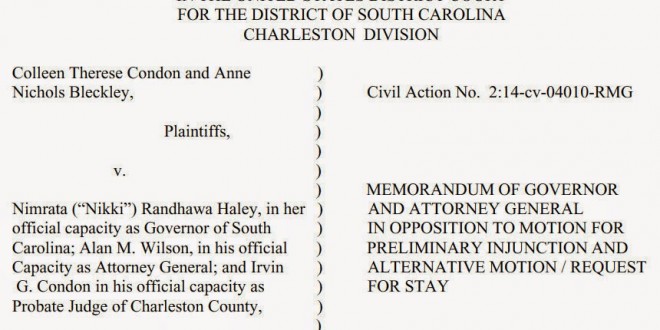 South Carolina Gov. Nikki Haley and state Attorney General Alan Wilson, both of whom are up for reelection today, have filed a federal brief opposing the demand that the state comply with the ruling of the Fourth Circuit Court and allow same-sex marriages to commence. Via the Post And Courier:

The 57-page brief filed late Monday argues that a lawsuit filed last month by Charleston County Councilwoman Colleen Condon and her partner, Nichols Bleckley, should not move forward and that an injunction they requested not be granted because the case is moving quickly enough to avoid any serious harm. The brief also contends that federal courts overall have moved at an unprecedented pace already. “Centuries of precedent have been swept away in other jurisdictions in the space of only two or three years. Never have the Courts made judgments so quickly about an issue that had received little attention before now. But the legal proceedings are not over,” the filing says.

A preliminary injunction is an “extraordinary and drastic remedy” designed to avoid “irreparable harm,” which attorneys for Haley and Wilson contend hasn’t been proven. If Gergel grants the injunction, the defendants want him to issue a stay while they appeal to the U.S. Court of Appeals for the Fourth Circuit. “The window should not be opened on same-sex marriages at the substantial risk of closure again should the Defendants’ appeal be successful” the brief says. Attorneys for Condon and Bleckley have until noon Wednesday to file a response. Gergel could rule any time after that.

So marriage could be legalized as early as tomorrow afternoon, although the state will surely go through the same gyrations we saw in Idaho and elsewhere. Read the full brief at Equality Case Files.

Previous Liberty Counsel To Magistrates: Don’t Resign Or We Can’t Sue On Your Behalf
Next Homocon Drudge Taunts In Advance