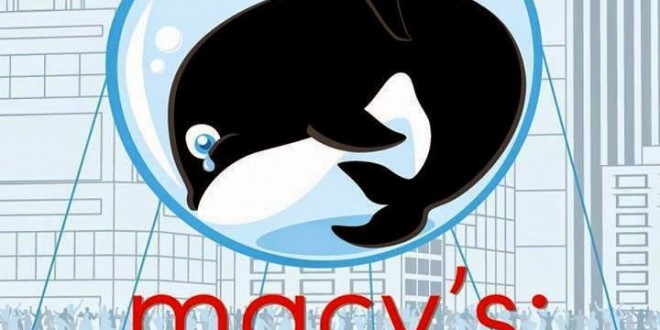 PETA will protest Sea World’s participation in the Macy’s Thanksgiving Day Parade with a naked demonstration outside the flagship store.

Demonstrators wearing nothing but black and white body paint to resemble orcas will squeeze into a bathtub outside the midtown Manhattan store on Thursday to mimic orcas held in captivity and to repeat last year’s demand – which was denied – that the float be excluded, People for the Ethical Treatment of Animals (PETA) said. “It is unacceptable to confine orcas to barren tanks that, to them, are the size of a bathtub,” said Delcianna Winders, PETA’s deputy general counsel. The naked protest in temperatures predicted to hover just above freezing rides a wave of controversy surrounding SeaWorld after the 2013 documentary film “Blackfish” alleged the park mishandled the huge sea mammals. The marine theme park uses orcas in its aquatic shows.

This year’s is the 88th edition of the parade, which will be attended by a projected 3.5 million spectators.