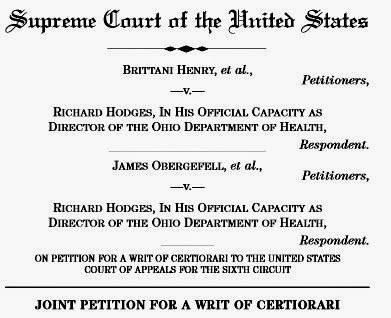 Lambda Legal and the ACLU are first in the coming wave of demands that SCOTUS review last week’s ruling by the Sixth Circuit Court.  From their Ohio petition:

These cases are about love, from birth to death. The relationships at the heart of each case involve the love spouses share, with each other and with the children they jointly raise, and the love that survives the death of a spouse. This enduring love has prompted this Court to hold that “choices about marriage” belong to the individual and are “sheltered by the Fourteenth Amendment against the State’s unwarranted usurpation, disregard, or disrespect.” Yet, despite this Court’s unequivocal insistence that the Fourteenth Amendment encompasses a fundamental right to marry “for all individuals,” Ohio singles out the lawful marriages of lesbians and gay men and treats them as invalid, turning members of these committed families into legal strangers. By disrespecting their marriages, Ohio has done more than deny petitioners basic legal rights to which they are entitled. It has treated Petitioners as second-class citizens whose most intimate relationships have been denied the dignity and respect they deserve.

Previous Darth Vader, Evangelist
Next MAP: What EU Nations Are Worst At