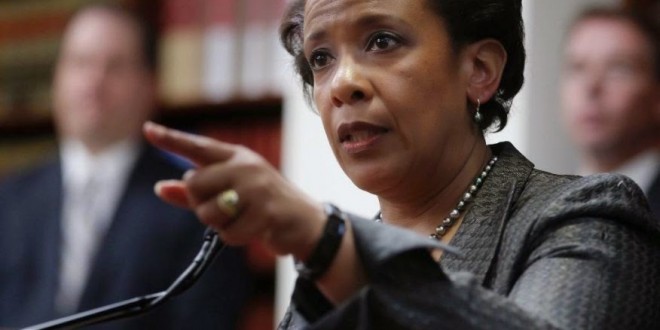 President Barack Obama will nominate Brooklyn federal prosecutor Loretta Lynch to replace the retiring Eric Holder as U.S. attorney general and if confirmed, she would become the first black woman to serve in the post, the White House said on Friday. The 55-year-old North Carolina native and Harvard-trained lawyer has deep experience in both civil rights and corporate fraud cases. Lynch is known for a low-key personality and stirred little controversy during two tenures as U.S. Attorney for the Eastern District of New York. Her nomination requires Senate confirmation. The Senate twice previously has voted to confirm her to federal prosecutor jobs, the last time in 2010. In a statement, White House spokesman Josh Earnest called Lynch “a strong, independent prosecutor” and said Obama would formally announce her nomination to be the nation’s top law enforcement official at an event in the White House Roosevelt Room on Saturday.

Upon news that President Obama will nominate Loretta Lynch to replace outgoing LGBT equality champion Eric Holder as Attorney General of the United States, the Human Rights Campaign (HRC), the nation’s largest lesbian, gay, bisexual, and transgender (LGBT) civil rights organization, praised the decision based on her record on civil rights. “Loretta Lynch will have big shoes to fill thanks to the incredible leadership of outgoing Attorney General Eric Holder and his unprecedented commitment to LGBT equality,” said HRC President Chad Griffin. “Based on her strong record on civil and human rights as a U.S. Attorney, we have no doubt she will continue that leadership as Attorney General. We look forward to working with her to ensure equal justice under the law for all LGBT Americans.”

Now comes the screaming from Teabagistan.

Previous AFA: God Kicked Native Americans Off Their Land For Sinning Against Him
Next AP Calls It: DeMaio Has Lost