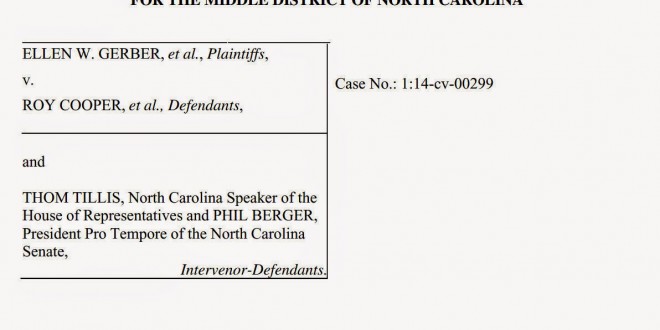 Within hours of a split ruling by a 6th U.S. Circuit Court of Appeals panel upholding gay marriage bans in four states, attorneys for North Carolina legislative leaders filed notice in the federal courts of their plans to appeal rulings in North Carolina that struck down a gay marriage ban. The court document, filed by John C. Eastman, a California lawyer and chairman of the National Organization for Marriage, outlines the plans of Phil Berger, president pro tem of the N.C. Senate, and Thom Tillis, speaker of the state House, to appeal a ruling in October by U.S. District Judge William Osteen Jr. that nullified a 2012 amendment to the state constitution defining marriage as a union between a man and a woman. Though Osteen allowed the legislators to intervene in the case on a narrow basis, Eastman’s notice states that the Republican legislative leaders do not believe that the federal district court put limits on their arguments during appeal.

Read the notice of appeal at Equality Case Files. NOM and the GOP were granted permission to intervene by the above court last month, although the court essentially told them they are wasting their time.