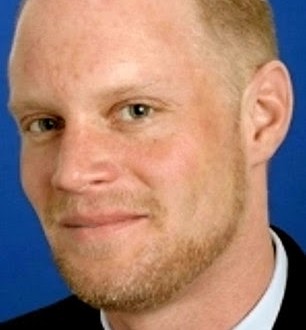 Gay Citigroup executive Shawn Miller, 42, has been found dead in his lower Manhattan apartment after apparently hooking up with a man he met online. Miller was discovered with his throat slashed “from ear to ear,” but NYPD investigators say his death was likely a suicide fueled by crystal meth and alcohol.

Cops initially suspected foul play, saying earlier that no weapon was found in the apartment and that Miller was caught on surveillance video arguing with a male companion in the building’s elevator. When crime scene investigators moved Miller’s body, they discovered a knife under him, leading them to believe he slashed his own throat and collapsed into the tub on top of the weapon, sources said. Detectives now suspect Miller killed himself after going on a booze- and drug-fueled bender since at least Monday with a stranger he hooked up with through the classified advertising website Backpage.com, the sources said. Police found evidence of alcohol and drug use in the apartment, including what appeared to be crystal meth, sources said. The man who Miller was arguing with in the elevator apparently left the banker’s apartment late Sunday or early Monday, sources. Miller called down to the lobby and asked the doorman not to allow the man back into the building, according to sources.

Records show that Miller called 911 twice to report that he was being stalked by somebody outside his apartment building. Police are seeking the man seen on the surveillance video.