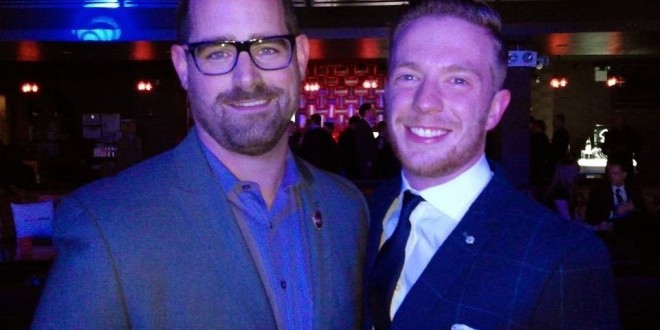 Pennsylvania state Rep. Brian Sims and boyfriend Brandon McMullin were among the gay glitterati in attendance at last night’s Out 100 party at Stage 48 in Hell’s Kitchen. Also seen above are Out 100 honorees Freedom To Marry head Evan Wolfson with his husband Cheng He, journalist Chris Geidner, Liz Margolies, founder of the National LGBT Cancer Network, and her trans activist husband Scout, director of LGBT Health Link. Orange Is The New Black actress Lea DeLaria hosted and pop singer Mary Lambert was among the performers. I hung out for a bit with NYC Councilman Corey Johnson and Dan Pepitone (above) and caught glimpses of Jason Collins and Zachary Quinto, but didn’t get a chance to grab a photo, dammit.