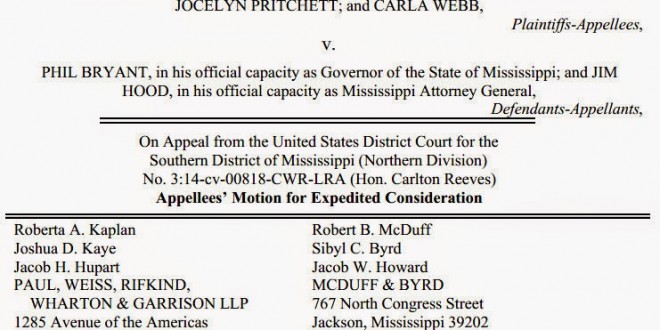 The Campaign For Southern Equality and DOMA attorney Roberta Kaplan have petitioned the Fifth Circuit Court for an expedited review of the ruling that overturned Mississippi’s ban on same-sex marriage. On Wednesday, Gov. Phil Bryant and state Attorney General Jim Hood appealed that ruling to the Fifth Circuit, which is already scheduled to hear oral arguments in the Texas and Louisiana cases on January 9th. The Mississippi motion requests a hearing on that date also:

The parties in Campaign for Southern Equality deserve to have their arguments heard by this Court and to have their dispute settled upon its own merits alongside De Leon and Robicheaux, rather than indirectly and by implication through other litigants from other states. Judge Reeves’ decision includes extensive discussion of the history of the Mississippi laws in question, the history of discrimination against gay men and lesbians within the State of Mississippi, and the current political climate with respect to equal rights for gay men and lesbians in the State of Mississippi. These present unique issues for this Court’s consideration, which are not present in either De Leon or Robicheaux.

The state-specific nature of Campaign for Southern Equality weighs heavily in favor of this Court addressing this case directly. Moreover, doing so would allow Mississippi’s laws to stand (or fall) on their own merits, rather than forcing Plaintiffs-Appellees to rely on other private litigants, or the State of Mississippi to rely on argument from its sister States. The inconsistency in the application of the constitutional rights at issue in De Leon, Robicheaux, and Campaign for Southern Equality strongly warrants this Court providing its reasoned guidance with respect to the laws of each state in this Circuit.

RELATED: The stay on Florida’s ruling is due to expire on January 5th and state Attorney General Pam Bondi has demanded that the Eleventh Circuit Court issue an indefinite stay extension in that case while appeals proceed. That week in January promises to be quite busy.