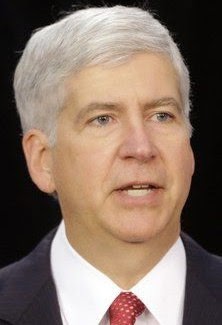 Michigan’s gay marriage ban remains in place after a federal court ruling on Thursday, and Republican Gov. Rick Snyder and Attorney General Bill Schuette both made clear they will continue to defend it. “When I became governor, I took an oath to support and defend our state constitution, without exceptions,” Snyder said in a statement, referencing the 2004 voter-approved amendment that defined marriage as between one woman and one man. “My obligation to carry out that oath is not a matter of personal preference. As I have said throughout this process, I will respect the court’s decision as it examines the legality of same-sex marriage.” Snyder has consistently declined to take a stance on the underlying issue — whether the same-sex marriage ban is good public policy — which has led to criticism from gay rights supporters.

Back in March, Snyder refused to recognize the 300+ marriages that took place during the brief period in which they were allowed.