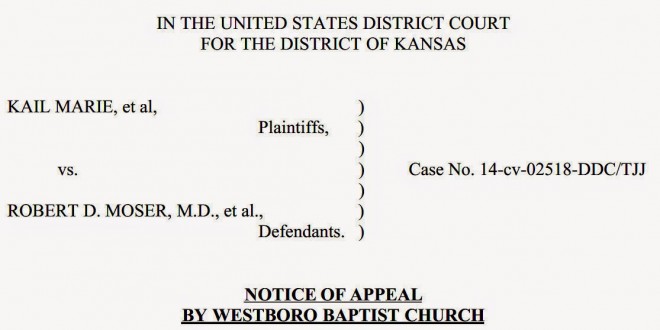 KANSAS: Westboro Appeals To The Tenth

Like the wackadoodle Unruhs, Westboro Baptist Church has appealed to the Tenth Circuit Court after being denied permission to intervene in the Kansas marriage equality case.

WBC appeals the erroneous conclusion that WBC lacks sufficient interest in these proceedings to intervene, after WBC has faithfully warned for 25 years, using every lawful means of publishing; pleading with the citizens of Kansas to obey God; to put away proud sin; and to not let the sins of adultery (including divorce/remarriage), fornication, greed, murder (including of unborn babies), and pride, be used to justify the even worse sins of homosexuality and same sex marriage. No group of people has toiled in the vineyard of warning of the impact of same sex marriage more tirelessly than the members of WBC; and no group of people has a greater interest in vigorously opposing plaintiffs’ claims.

RELATED: On Friday the Tenth Circuit Court denied the stay pending appeal request made by the state. Barring a stay by SCOTUS, same-sex marriage becomes legal in Kansas tomorrow.