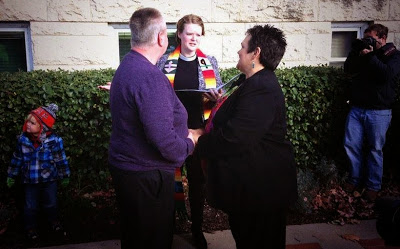 Marriage licenses are being issued today in a handful of the 103 Kansas counties.

Judges in at least four Kansas counties were issuing marriage licenses to same-sex couples a day after the U.S. Supreme Court issued a ruling allowing them to wed. Clerks in other counties were giving applications to gay couples but requiring them to abide by the state’s three-day waiting period before they can get a license. As of midmorning Thursday, Douglas County District Judge Robert Fairchild had waived the waiting period for three couples and said he would consider similar requests on a case-by-case basis. A different judge had agreed to preside over the wedding of one of the couples after the courthouse closes at 5 p.m. CST. Couples received licenses in Sedgwick County, while judges in Cowley and Riley counties each had issued one marriage license to same-sex couples.

Previous Kirk Cameron: It Was Really Pagans That Stole Christmas From Christians
Next Brian Brown Has The Kansas Super Sadz