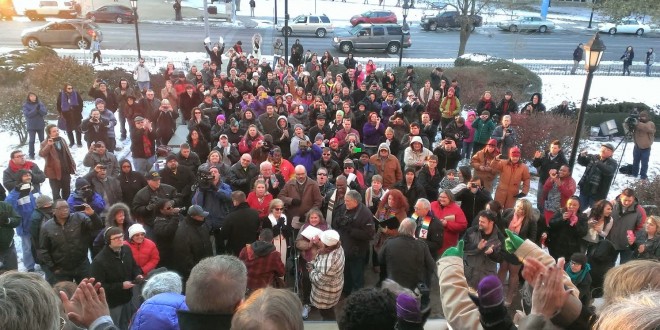 Via the Wichita Eagle:

Despite vocal opposition and freezing temperatures, Monday was a day for Kansas history textbooks. On the front steps of the Historic County Courthouse in downtown Wichita, 15 same-sex couples proclaimed their love for one another and were legally married. There were cheers of affirmation, but there also was opposition. At the beginning of the mass ceremony, a man standing next to the clergy repeatedly shouted “God said no! God said no!” The crowd of about 100 who were gathered to watch the ceremony chanted back “God said yes! God said yes!” as he continued to chant and was led away. Some of those who opposed the ceremony played loud music. Supporters played equally loud music and then the organ music to Wagner’s “Bridal Chorus.”

Only a handful of the 105 Kansas counties have begun issuing licenses.

“There’s a lot of frustration and impatience,” Thomas Witt, executive director for Equality Kansas, told The Washington Post. Witt said he knows of at least six counties issuing marriage licenses. Others are accepting applications but refusing to issue licenses, while others are refusing to accept applications altogether. Jennifer Rapp, a spokesperson for Kansas Attorney General Derek Schmidt, said his office has asked the Kansas Supreme Court “to provide further guidance to the district courts in light of the federal preliminary injunction.” “We are awaiting a decision on this case,” Rapp said in an email. Schmidt suggested earlier this month in a statement that a decision in the case applied to Douglas and Sedgwick counties, where two lesbian couples were denied marriage licenses. “I think the Kansas attorney general has abdicated his responsibilities,” Witt said. “If anybody is causing chaos and confusion … it’s the Kansas attorney general.”

Previous This Is Probably Our Fault
Next Bearforce 1 – Action Man