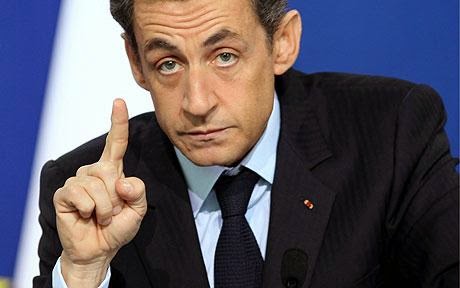 Former French president Nicholas Sarkozy, who is expected to run for president again in 2017, yesterday called for the repeal of same-sex marriage during a debate organized by a far-right group. Via the Guardian:

Referring to the “mariage pour tous” or “marriage for all” legislation passed by France’s Socialist government last year, he said it needed “rewriting from top to bottom”. His comments prompted catcalls from the 3,000-strong audience of the group Common Sense, and cries of “Repeal! Repeal!”. Sarkozy, appearing rattled, responded: “If you’d rather one says repeal the law and make another one … in French, that’s saying the same thing. It comes to the same result. “But hey, if that makes you happy, then frankly, it doesn’t cost much.” Sarkozy went on to say that he was in favour of some form of marriage for same-sex couples, but something different from that for heterosexuals, and that he opposed surrogacy for same-sex couples. The same-sex marriage legislation is known officially as the Taubira law after the justice minister Christiane Taubira who oversaw its introduction. “It’s no use being against surrogacy if you don’t repeal the Taubira law,” Sarkozy said to cheers and applause.

Sarkozy has been married three times. He has declared that “the roots of France are essentially Christian” and has advocated reducing the separation between church and state. In July of this year, he was arrested and charged with corruption on allegations that he interfered with an investigation seeking to prove that he “received up to €50 million in illegal campaign financing from the late Libyan dictator Muammar Gaddafi.” He faces a possible ten year prison sentence and his arrest was the first time in modern history that a former French president had ever been in police custody.

The viciously anti-gay Manif Pour Tous, whose movement is supported by local neo-Nazis and NOM’s Brian Brown, is celebrating Sarkozy’s declaration with dozens of tweets.