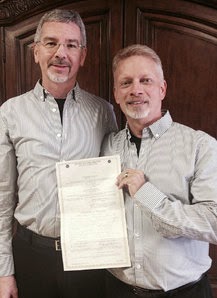 John Smid, former leader of the “ex-gay” group Love In Action, married a man in Oklahoma on Sunday. Via the Memphis Flyer:

Smid has been living as an out gay man for several years now, and he’s been in a relationship with [Larry] McQueen for one year. Gay marriage just became legal in Oklahoma last month. The couple live in Paris, Texas, where Smid moved from his Memphis home in the summer of 2013. Smid’s journey from ex-gay leader to happily out gay man has been a long one. He was promoted to the role of executive director of Love in Action in September 1990, and in 1994, the organization moved its ministry to Memphis. Love in Action operated here quietly until 2005, when protests over a youth “straight” camp called Refuge sparked a national media firestorm. Smid met McQueen three years ago, but they were just “acquaintances with common friends,” wrote Smid in his Facebook announcement of their marriage Sunday. “I gradually got to know him over time until we reached a place in our lives that we saw we wanted to get to know one another through a dating relationship. As we dated we shared our vision for life, our personal philosophies, and our faith values. We found a compatibility that was comfortable and exciting,” Smid said.