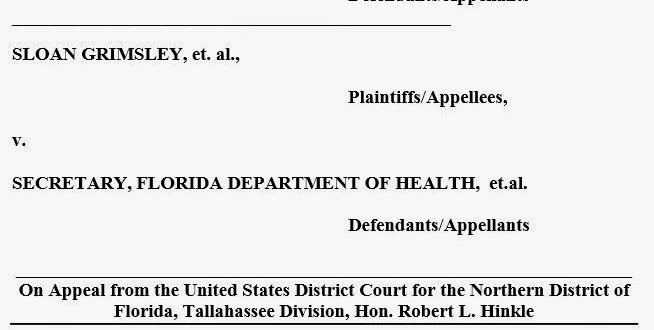 The personal, social and financial costs of these homosexual-specific health problems concern not just those who engage in homosexual activity, but also the larger community of citizens who help provide services and who must bear part of the burdens imposed by the health challenges. It is eminently rational, if not compelling, for the voters of Florida to seek to minimize the deleterious effects of these conditions on public health, safety and welfare by affirming that marriage in Florida remains the union of one man and one woman. In addition, same-sex relationships, particularly relationships involving two male partners, carry greater risks for domestic violence than do marriages.

To hold that the FMPA does not even pass rational basis would be to hold that 5 million Florida voters acted irrationally in voting for the Amendment. Furthermore, such holding would essentially proclaim that billions of people in every government and major religion worldwide, as well as every state in the union from the founding until 2003, were irrational in their universal support of man-woman marriage. (Marriage was defined as the union of one man a nd one woman by every government, world religion and state until 2003.) Such a conclusion is breathtaking.

Florida’s marriage ban passed by a mere two points, which I believe was a closer margin than any other state. Staver also mentions Alfred Kinsey, saying that his research has spawned an evil culture that “even the homosexual-tolerant ancient Greeks could not imagine.” You may recall that Liberty Counsel once loudly denounced Pam Bondi for what they said was her tepid defense of Florida’s marriage ban. Such criticism stopped several months ago after Bondi became more aggressive. Staver was repeatedly denied in his attempts to intervene in Florida’s marriage lawsuits on the basis of Bondi’s perceived inactions.