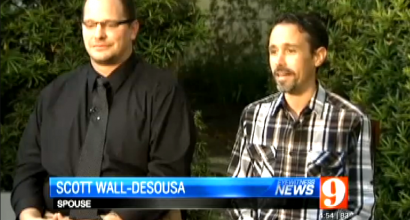 A same-sex couple living in Florida who used their marriage license to change their names on their drivers’ licenses just received a letter from the Florida Department of Motor Vehicles warning them that they are both in danger of losing their licenses. The warning came in the mail after Channel 9 did a story on how Daniel and Scott Wall-Desousa managed to legally change their name with an out-of-state marriage license. “It informs me and notifies me that my driving privileges will be canceled indefinitely as of Nov. 22,” said Daniel Wall-Desousa. The Wall-Desousas successfully changed their names at the DMV by showing their marriage license. When Channel 9 reported on the name change, Scott Wall-Desousa said the clerk was told to not ask questions if the license was issued to a same-sex couple and simply grant the name change. “It is a ‘don’t ask, don’t tell’ policy, and I guess we have been told, ‘Here is the repercussion,'” said Scott Wall-Desousa.

The couple has already changed their names on their Social Security cards and says they will sue the state over the driver’s license issue. (Tipped by JMG reader Win)