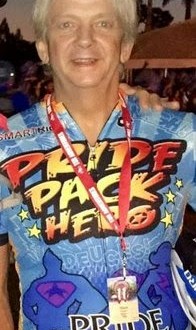 I am heartbroken to report that Mark Haines, my uncle, the founder and CEO of Mark’s List, and a long-time leader in the Florida GLBT community, was killed last night. And yet, I tenuously reach for some ray of happiness in knowing that he died while doing what he loved most. He was participating in the Smart Ride with his brother (my father), Stephen Lang (long-time Mark’s List photographer), and hundreds of others. He died instantly, hit by a car while walking home from dinner after the best day and the best ride of his life.

CBS Miami reports on the accident:

A prominent LGBT leader from Fort Lauderdale died Friday night after he was hit by a car in the Florida Keys. The Florida Highway Patrol reported Mark Haines, 54, was in the Keys taking part in a bicycle race called SmartRide from Miami to Key West. “It’s a very sad loss,” said Tim Barton. “I know our community will miss Mark a lot,” added Joe Billingsley who knew Haines. According to a FHP press release, Haines was crossing from the Gulf side of U.S. 1 near mile marker 59 to the ocean side when he walked in front of a truck around 7 p.m. Another vehicle, an SUV swerved to avoid hitting the truck and also struck Haines. After that impact, a third car that swerved to prevent hitting the SUV hit Haines too, FHP said. Haines died at the scene. All three drivers waited for police to arrive.

South Florida Gay News notes that Haines had lost 70 pounds while training for the event. Other participants, which included our own Father Tony, were notified of the accident in an announcement made at the ride’s end point in Key West yesterday morning.