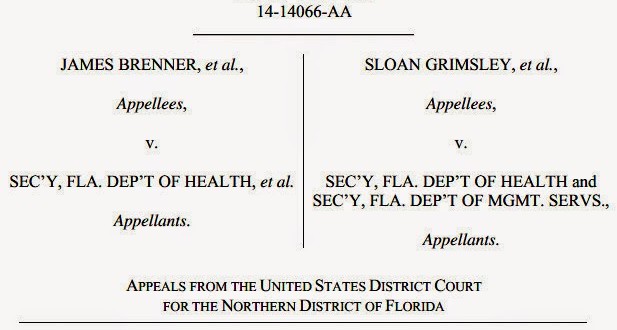 Florida Attorney General Pam Bondi tonight filed an appeal with the Eleventh Circuit Court of the August ruling in the ACLU / SAVE Dade suit that overturned that state’s ban on same-sex marriage.   On November 5th, US District Court Judge Robert Hinkle denied the request to immediately lift the stay on his ruling while
the appeals process goes on. Hinkle left in place his order for that
stay to expire on January 5th, 2015. Bondi’s notice of appeal to the Eleventh Circuit was filed more than two months ago and today’s appeal is the first same-sex marriage case to reach that court, whose jurisdiction includes Florida, Georgia, and Alabama.

From the summary of Bondi’s appeal:

Florida has long defined marriage as the union of one man and one woman. In 2008, voters amended the Florida Constitution to reaffirm that policy. The United States Constitution does not prohibit Florida or its voters from making that choice, and the district court’s contrary conclusion was wrong. As the Supreme Court has recognized, States have the virtually exclusive authority to define and regulate marriage. Consistent with that authority, States may choose to allow same-sex marriage, as several States have. But States may also choose to maintain a traditional definition of marriage, as several other States have. Principles of federalism leave the choice to the States.

The United States Supreme Court’s decision in Baker v. Nelson is consistent with these principles. In Baker, the plaintiffs claimed the Fourteenth Amendment required States to allow same-sex marriage, the same claim the plaintiffs present here. The Supreme Court’s summary dismissal was a decision on the merits that rejected those claims, and it is binding on this Court. None of the more recent Supreme Court cases undermine Baker, much less overrule it. In fact, the Supreme Court’s most recent decision regarding same-sex marriage, United States v. Windsor, is fully consistent with the principle that federalism allows States to define marriage.

No fundamental right is at issue here because same-sex marriage is not deeply rooted in this Nation’s history and tradition. The decisions recognizing marriage as a fundamental right, including Loving v. Virginia, all turned on the historical understanding of marriage as the union of a man and a woman. Because no fundamental right is at issue, and because there is no other basis for applying heightened scrutiny, only rational basis applies. Florida’s laws satisfy this deferential standard. Florida’s laws therefore do not violate the Due Process and Equal Protection Clauses of the Fourteenth Amendment. Nor do they violate the right to travel, the Establishment Clause, or a right to intimate association. This Court should reverse.

In addition to the above-cited Baker, Loving, and Windsor cases, among the other cases that Bondi’s appeal cites is Lawrence V Texas, the landmark 2003 Supreme Court ruling that invalidated anti-sodomy laws nationwide. Essentially, Bondi argues that just because the state isn’t arresting gay people for fucking doesn’t mean they also entitled to marriage.