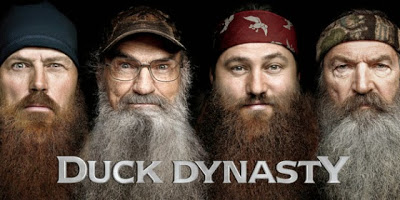 Yes, this is going to be a thing.

Undertaking one of the more audacious theater projects in recent years, the Robertsons — known for their long beards, duck-hunting merchandise and occasional inflammatory remark — are moving to expand their Louisiana-based multimedia franchise with “The Duck Commander Family Musical.” The 90-minute show, with actors playing the family members from A&E’s “Duck Dynasty” as they celebrate the family’s long history from rags to riches, hopes to open in February at the Rio hotel and casino, where the Chippendales show and Penn & Teller are now running.

Even before rehearsals start, the show is courting controversy. Several Broadway producers, many of whom are liberal, gay, or both, are aghast that colleagues would work with a family whose patriarch, Phil Robertson, has compared homosexuality to bestiality. Gay rights leaders are also eyeing the show with concern, while evangelical Christians — many of whom admire the Robertsons — might be hesitant to go to a Las Vegas casino and see whether New York artists have fairly rendered the family.

The show is being produced by Michael David, the same guy that brought you the multiple Tony-winning Jersey Boys. The show’s gay-married director Jeff Calhoun, who won the Tony for Newsies, says that he and the Duck Dynasty clan have “agreed to disagree” on gay issues.

Previous Viewer Question For Pat Robertson
Next Kirk Cameron: It Was Really Pagans That Stole Christmas From Christians