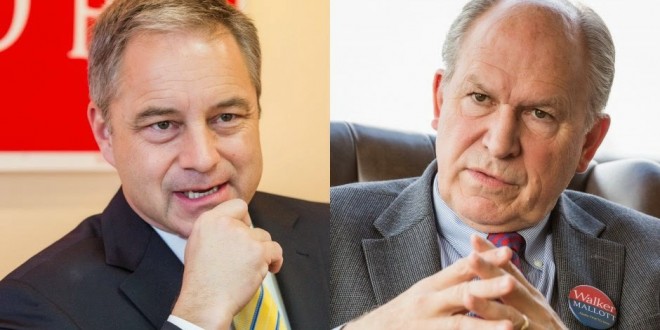 Bill Walker [above right], an attorney and former mayor of Valdez, is the first candidate unaffiliated with a party to be elected governor since statehood. Walker’s mentor, Wally Hickel, served a term as governor with the Alaskan Independence Party, a recognized third-party in the state, before going back to the GOP. Walker, who finished second to Parnell in the 2010 GOP gubernatorial primary, bypassed this year’s primary by gathering signatures to support an outside run. But Walker didn’t change his party affiliation from Republican to undeclared until forming a “unity ticket” on the November ballot with Democrat Byron Mallott as the candidate for lieutenant governor. Mallott won the Democratic nomination for governor in August, but a Walker-Mallott ticket was seen as more competitive to Parnell, who ran with Anchorage Mayor Dan Sullivan, a fellow Republican. Walker and Mallott joined forces in early September at the urging of labor interests and others.

Walker was endorsed by Sarah Palin even though Parnell was her lieutenant governor.