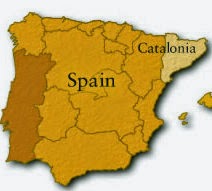 Spain’s autonomous Catalonia region has approved an anti-homophobia bill which requires those accused of anti-LGBT acts to prove they are innocent, rather than be considered so until proven guilty. Via TeleSUR:

The law, passed on Thursday and backed by 80% of the Catalan Chamber, will protect the LGBT community from homophobic attacks. “I feel furious when someone appears to deny or play down the discrimination that we gays have suffered or run the risk of suffering,” said Catalan Socialist Miquel Iceta, one of the first politicians to come out as gay. “They speak derisively of a gay lobby. But look at this room! This is not a group of people working undercover to achieve illegitimate goals. This is a group working to defend the rights of everyone,” he added. However, the new bill has come under fire from various factions due to the clause that states that the person who is accused of homophobic acts must prove their innocence. On Friday, the bishops of Catalonia expressed their concern that the anti-homophobia law could violate the presumption of innocence and “complicate the liberty of communication in the teachings of Catholic morals.”

Calling it the “world’s most pioneering laws against homophobia,” the state-run Catalan News Agency (ACN) reports that it includes fines for homophobic behavior at the work place and positive discrimination measures, such as having to prove one’s innocence if accused of homophobia. “This positive discrimination measure is already in place for other offenses, such as domestic violence against women, in instances when it is very difficult to prove,” the ACN report said. The new provisions will punish those who attack gays, lesbians, bisexuals and transsexuals with fines of up to €14,000 ($17,700). According to a study on hate crimes, the first of its kind, published by the government, it showed that out of the 1,172 hate crimes recorded in 2013, a majority (452) were based on the victim’s sexual orientation, followed by race (381) and disabilities (290).

Previous From The Weather Channel
Next Houston Pride Leaves The Gayborhood