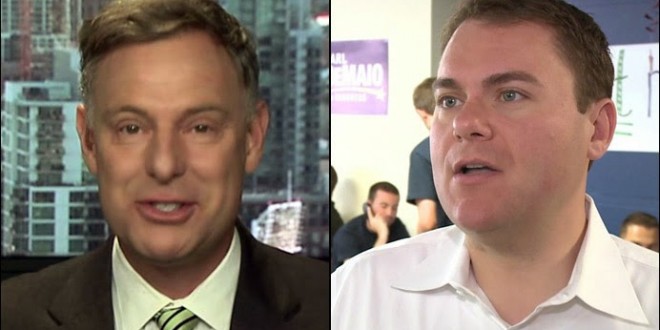 Via the San Diego Fox affliliate:

The race for a San Diego-area congressional seat held by Rep. Scott Peters, D-San Diego, is a dead heat, according to results of a poll released Tuesday. The survey conducted on behalf of 10News and U-T San Diego found former Councilman Carl DeMaio — a Republican — with a 46-45 lead over the incumbent in a sampling of more than 600 likely voters in the Nov. 4 general election. SurveyUSA called 650 registered voters who live in the 52nd Congressional District between Friday and Monday, and 10 percent were undecided. The campaign, which is being watched nationally, has been punctuated with accusations that DeMaio masturbated in front of a former staffer, and that backers of Peters got a DeMaio “playbook” allegedly taken by vandals in a break-in earlier this year. On Monday, District Attorney Bonnie Dumanis said there wasn’t enough evidence for charges in the break-in or sexual harassment investigations.

The new result shows a three point decline for DeMaio.