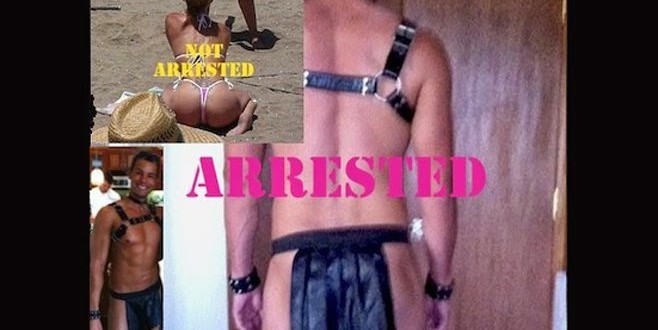 A California appeals court is about to hear the case of Will Walters, a gay man arrested at San Diego’s gay pride event in 2011 because his outfit did not fully cover his rear end. Charges were dropped after the man spent the night in jail, but Walters is suing on the grounds that police targeted the pride event while ignoring the far more skimpy outfits worn daily at the city’s beaches. Via the San Diego Reader:

The city attorney’s office chose not to prosecute but the damage had been done. Walters wanted to expose what his attorney calls the city’s “Gay Special Events Nudity Policy.” “The city was asked to turn over copies of all public nudity citations and arrest reports issued by the San Diego Police Department over the last five years,” attorney Christopher Morris wrote in the appeal. “The city produced 104 redacted citations and reports. In not one of those reports was a person arrested or cited for wearing a thong or a g-string type bathing suit bottom.” Now, as the case makes its way through the courts, some have begun to speak out against the city’s policy and the arrest. West Hollywood councilmember, attorney, and openly gay man John Duran wrote an op-ed for the Daily Journal, a legal publication for attorneys, denouncing the city’s police force and the city for arguing that the arrest had nothing to do with sexual orientation or discrimination.

The date for Walters’ hearing has not yet been set.

Previous TAIWAN: Pride Parade Draws 70,000
Next Tweet Of The Day