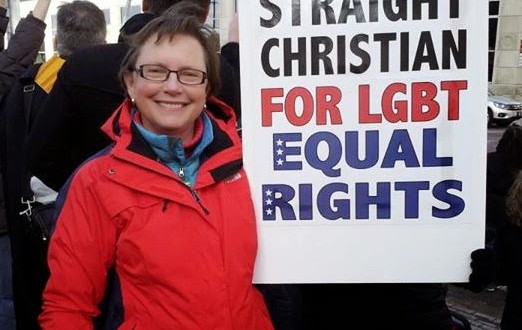 It’s my heartbroken duty to let you know that beloved JMG community member Betty Salwak, known to many of you here as Birdie, passed away today of the breast cancer she battled for the last several years. As some of you know, Betty served as JMG’s volunteer behind-the-scenes copy editor, cheerfully correcting my typos, misspellings, and inelegant syntax, for which I thanked her profusely in my New Year’s posts every year.

Betty fought her illness with extraordinary candor, optimism, and humor – even in the face of the recent unanticipated setback that surprised everyone. Evidence of that can be found on her Facebook page, where her profile photo today is a bald Mona Lisa. When it became apparent that further hospital treatment would be useless, early this week Betty decided on in-home hospice care after being told she would have 30-60 relatively pain-free days until the end. That end, tragically, came after only two days.

As you can see by the photo above, Betty was a straight Christian, but as rare as our allies in that world seem to be sometimes, Betty was no mere keyboard warrior. She served as the secretary for the Indianapolis PFLAG chapter and as the coordinator of children’s ministries at her local LGBT-welcoming Presbyterian Church. In addition, she was an ardent supporter of the Indiana LGBT Youth Group, for whom she battled as anti-gay factions fought to prevent them from issuing a fundraising Indiana state license plate. When that fight was finally won, Betty was ecstatic. And I’m told that she was thrilled on Monday when marriage equality came at last to her home state.

Betty was first directed to JMG about eight years ago while searching for stories about the early years of the plague, as it had taken her own brother many years ago. It was her brother’s treatment by some members of her family that initially fueled Betty’s activism and she and I shared many stories about those dark, dark years. Five years ago Betty became an occasional writer for the Bilerico Project. Her first post there revealed her passion. An excerpt:

I came to realize that it was time for me to step up and stand against what I knew was a gross injustice. I was seeing people who claimed to be Christians spewing hateful invective in the name of God against people who were gay. Those malevolent tirades are far and away the loudest shouts being heard by the LGBT community. The only other voice nearly as loud says there is no God.

Those people have nothing to do with the loving God I know, the One whose grace and unconditional love is for all people, just as they are, just as he made them to be. Unfortunately, the voices with that message have been a mere whisper in the wind. It was time to stand and be heard. But how could I get anyone to heed me? I had a lot to learn. I needed to know more about the gay community.

About three years ago a gay friend linked me to my first blog; it was by some guy who called himself “Joe.My.God.” Well. Joe’s blog was (and is) intelligent, moving, funny, informative, and very very angry at Christians. Links from his blog led me to more, and over the past three years I have developed some genuine and important friendships with gay, lesbian, and even a few straight bloggers. Those Internet friends have been wonderful in sharing their wisdom, insights and feelings. I feel privileged to know them and have been lucky enough to meet a few.

I have learned of the anguish of rejection and the stinging betrayal experienced by those raised in churches which call them “objectively disordered,” sinners, even abominations. I’ve read far too many times of self-destructiveness and even suicides by young people who could not reconcile their faith with the person God made them to be. This has to stop.

I am convinced that the vast majority of straight Christians are ignorant of the terrible impact of their silence, that they would speak up about their support if they knew it would literally save lives. I am doing everything in my power to tell them that this is the time. It is my fervent hope that the civil victory that is imminent will eventually be shared by most churches during my lifetime.

Betty leaves a husband, two adult children, and hundreds of friends in our community, both in real life and online. Many here on JMG became her Facebook friends, proof of which was clear tonight as so many of you wrote to share your grief at Betty’s passing. Please consider dropping by her Facebook page. I will let you know if the Salwak family is directing donations to any of Betty’s favorite causes.

Our own Father Tony was particularly close with Betty and I’ll close this sad, sad post with the portrait he made during her Fort Lauderdale visit with him in March while enjoying a period of remission. Thank you, Birdie. This world could use a few million more of you.