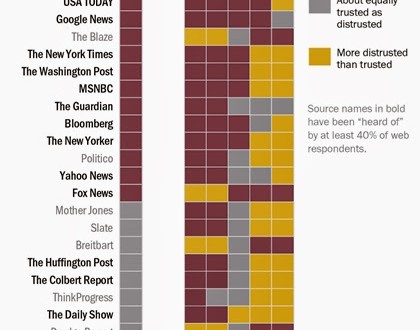 From the Pew Research report:

Those with consistently conservative political values are oriented around a single outlet—Fox News—to a much greater degree than those in any other ideological group: Nearly half (47%) of those who are consistently conservative name Fox News as their main source for government and political news. Far fewer choose any other single source: Local radio ranks second, named by 11%, with no other individual source named by more than 5% of consistent conservatives. Those with mostly conservative views also gravitate strongly toward Fox News – 31% name it as their main source, several times the share who name the next most popular sources, including CNN (9%), local television (6%) and radio (6%) and Yahoo News (6%).

On the left of the political spectrum, no single outlet predominates. Among consistent liberals, CNN (15%), NPR (13%), MSNBC (12%) and the New York Times (10%) all rank near the top of the list. CNN is named by just 20% of those with mostly liberal views, but still tops their list, followed by local television (11%) and NPR (9%). Both MSNBC and Fox News are mentioned by 5% of those who are mostly liberal. Those in other ideological groups name the New York Times, NPR and MSNBC less frequently as top news sources.

Respondents with a roughly equal mix of liberal and conservative values also have a diffuse mix of news providers. CNN (20%) and local television (16%) are the most frequently-named top sources, with a long list of other news sources named by fewer than one-in-ten. Fox News (8%) is among the most-named sources in this “long tail,” along with Yahoo News (7%) and Google News (6%), both of which primarily aggregate and highlight news produced by other outlets.