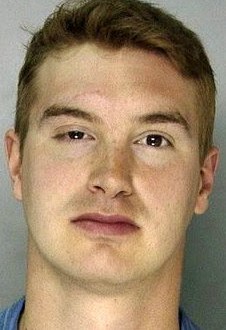 PENNSYLVANIA: Murder Charge For Man Who Met His Victim On Craigslist

A Pennsylvania man has been charged with robbing and murdering a local man he met via a hook-up ad that the killer had posted on Craigslist. Police had already been seeking the suspect for failing to show up for his September trial on child rape charges. Via the Associated Press:

Chad Marshall Wilcox, 28, of Williamsport, was arraigned Friday on charges of first-degree murder, robbery and related offenses in the Sept. 21 death of Manuel Hakimian, 36, of Norristown. He is being held without bail and has a preliminary hearing scheduled for Nov. 7. Online court records do not list an attorney for him. “This is a very vicious murder,” said Montgomery County Deputy District Attorney Thomas W. McGoldrick. “The evidence suggests that the victim was tied up when he was killed. We allege that the defendant actually cut the victim’s throat.”

Hakimian’s body was discovered by family members who went to his apartment Sept. 21 when he failed to show up for a family function, and police found that his cellphone, computer, wallet and car were missing, according to a criminal complaint. Wilcox told detectives that, on the day the trial was supposed to begin, he traveled to the Philadelphia area and posted an advertisement on Craigslist seeking sex with men, intending to rob them of money to feed his heroin addition, according to court documents. He said Hakimian picked him up on Sept. 20 and drove him back to Hakimian’s Norristown home, according to a criminal complaint. He also claimed he plotted with three other men to rob Hakimian.

Wilcox claims that it was his accomplices that committed the murder. (Tipped by JMG reader David)

Previous Tired Old Queen At The Movies #126
Next Jimmy Carter: States Should Decide On Marriage, Not The Federal Government