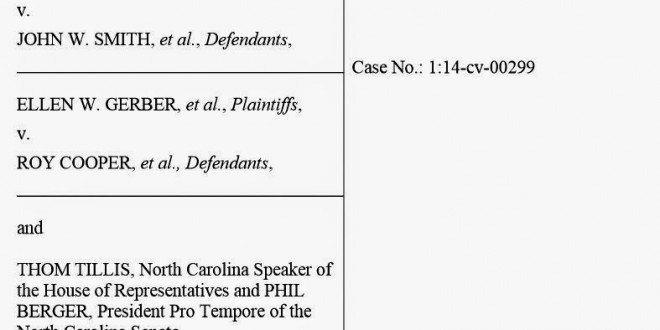 NORTH CAROLINA: GOP Tells Federal Court It Has No Jurisdiction On Marriage

GOP leaders in North Carolina have filed their response in that state’s marriage equality case, claiming that the federal court has no jurisdiction over state laws. Matt Comer reports at Q Notes:

Attorneys for state Speaker Thom Tillis and Senate President Pro Tempore Phil Berger filed their latest document shortly after 11:30 a.m. In it, the state GOP repeatedly says, “Intervenors lack knowledge or information sufficient to form a basis as to the truth of these allegations,” in response to claims of discrimination and harm caused to same-sex couples. Additionally, Tillis and Berger are arguing that a 1971-72 federal case, Baker v. Nelson, allows the state of North Carolina to continue discriminating against same-sex couples and tells the court it has no jurisdiction over the current cases.

“Intervenors deny that this Court has subject-matter jurisdiction over this matter,” the GOP’s answer reads. “Intervenors contend that this matter should be dismissed for want of substantial federal question.” In the Baker case, the Supreme Court upheld a lower court’s ruling affirming no right to same-sex marriage in Minnesota. Conservative lawyers and activists have often argued the case allows individual states to set their own marriage laws. Other legal experts, though, say last year’s decision in Windsor overrules Baker, applying equal protection to same-sex couples. Every affirmative decision for same-sex marriage since Windsor have said the same.

Dig into the full response. I’m betting the judge will take a very dim view of this tactic. (Tipped by JMG reader Kent)