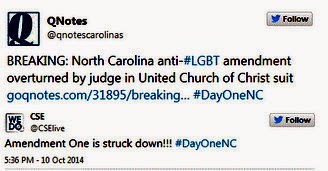 A federal judge in North Carolina’s Western District has issued an order permanently prohibiting defendants in a United Church of Christ lawsuit against North Carolina’s anti-LGBT amendment from enforcing the ban. Additionally, the judge denied Republican state leaders’ motion to intervene in the case. U.S. District Court Judge Max O. Cogburn, Jr., issued his two orders shortly after 5 p.m.  “Defendants are PERMANENTLY ENJOINED from enforcing such laws to the extent these laws prohibit a person from marrying another person of the same gender, prohibit recognition of same-sex marriages lawfully solemnized in other States, Territories, or a District of the United States, or seek to punish in any way clergy or other officiants who solemnize the union of same-sex couples,” Cogburn wrote. It appears Cogburn’s order applies only to those defendants named in the case — including registers of deeds in Mecklenburg and Buncombe counties.

This is NOT the same court hearing the GOP attempt.