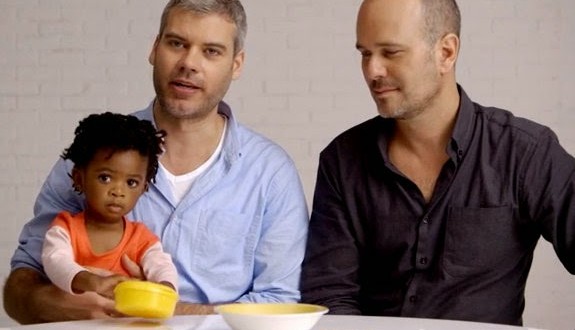 In another pro-gay move by General Mills, a Cheerios campaign that stars a gay family will launch this week in Canada. Via Marketing Mag:

“The Cheerios Effect,” is the colloquial name some have given to a phenomenon that anyone who’s eaten a bowl of the cereal knows: when two Cheerios float in milk, they tend to attract one another thanks to surface tension. Cossette is using this as a jumping-off point to address the broader issue of social isolation and loneliness. Even though the phrase “Cheerios effect” first popped up on Wikipedia in 2007, surprisingly, this marks the first time that the brand has ever used the phenomenon in a marketing effort. “We were in meeting with agency talking about issue of disconnection in society, this epidemic of loneliness,” says Jason Doolan, director of marketing for cereal at General Mills Canada. “We talked about the history of Cheerios and the role it could play in bringing people together. Somebody stood up and said, ‘You know, when you put two Cheerios in a bowl, they float together.’ It didn’t take more than 30 seconds on Google for someone to say, ‘It’s a real thing.’ We think it’s a perfect metaphor for human beings’ desire to connect.”

In addition to the gay family below, the Cheerios Effect campaign will tell the stories of young people connecting via sign language. A social media-driven site for customers to tell their own connection stories has been launched to support the ads. Get ready for NOM to boycott General Mills even harder!