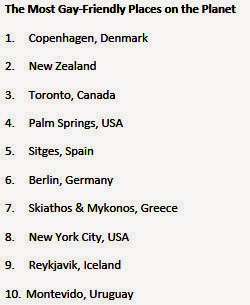 Lonely Planet today issued its annual ranking of the top ten most gay-friendly destinations in the world for LGBT tourism. Here’s what they say about this year’s list-topper, Copenhagen.

Denmark may be the home of Lego and at the forefront of New Nordic Cuisine, but importantly it made history in 1989 by becoming the first nation in the world to recognise registered same-sex partnerships. And at Denmark’s heart is the relaxed beauty of its compact cobblestoned capital, Copenhagen. Copenhagen is home to Europe’s oldest openly gay bar, Centralhjørnet, whose origins date back to the 1950s; as well as the hip and super-cool district of Vesterbro, which also happens to be the city’s red-light district. One of the most tolerant and open communities in Europe, Copenhagen’s functional yet edgy fashion scene, brilliant array of cocktail bars, excellent range of gay-friendly boutique accommodation and packed calendar of queer events make it the gay-friendliest place on Earth.

You may recall that Lonely Planet earned widespread criticism when Uganda topped their 2012 list.