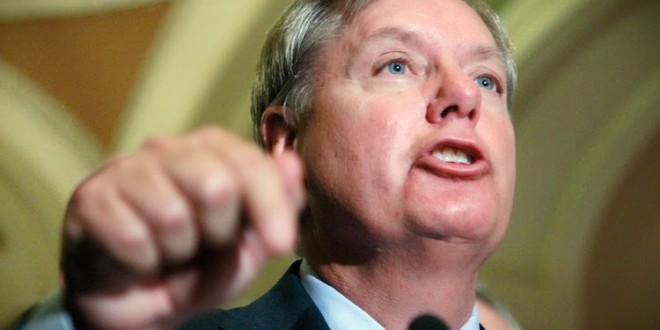 Yup, he said that.

In a recent, hour-long interview, Lindsey Graham said if he is reelected to the Senate in November, he will begin exploring a bid for the presidency. Graham has long been one of the most active and outspoken hawks in Congress. He has been a voluble critic of the Obama administration on a wide variety of national security issues—Guantánamo Bay, Benghazi, Iraq, Syria, Afghanistan, Russia, Iran, and others. Unlike many of his colleagues, Graham often first seeks to engage the administration privately as it debates policy with the hope that he can help shape the outcome rather than just criticize it after the fact. But Graham no longer trusts Obama enough to engage him on these matters. In our interview, Graham repeatedly spoke of the challenges that will face the next president because of the mistakes made under Obama. And he suggested that he might just be the one to fix them.

The only lifelong bachelor to become president was James Buchanan. And you know what they say about him.