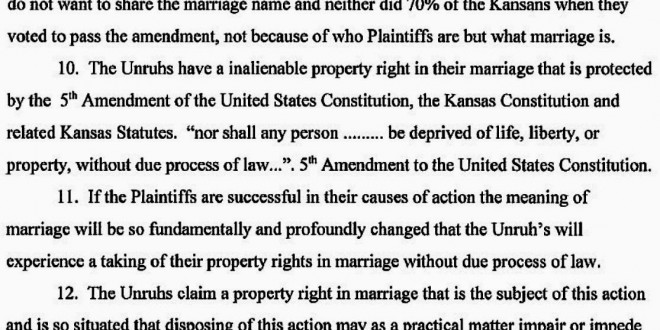 Phillip W. Unruh and Sandra L. Unruh today filed a motion to intervene in the ACLU’s marriage equality case in Kansas. As laid out in multiple points in their brief, the Unruhs declare that legalization of same-sex marriage would constitute the literal theft of their straight Christian marriage, a property which is guaranteed to belong only to them per the Fifth Amendment. Apparently, once them gays steal a chunk of their marriage, well, it’s all downhill for the Uhruhs from there. Next thing you know they’ll be cooking meth with hobos under a Kansas overpass. The rest of their brief is similarly cracktastic, complete with quotes from Genesis and the usual “they can’t even make a baby” crapola. Hit the link courtesy of Equality Case Files and dig out your favorite bits.