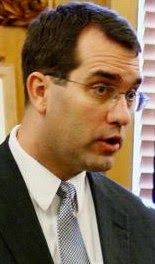 Kansas Attorney General Derek Schmidt today asked the state Supreme Court to block same-sex marriage licenses in Johnson County.  A lawsuit demanding that Kansas recognize out-of-state marriages was filed in December 2013, but there is presently no challenge to the Kansas ban itself.

Schmidt argues that Chief District Judge Kevin Moriarty exceeded his authority when he directed the court clerk to issue the marriage licenses this week. The attorney general contends that Moriarty didn’t have the power to authorize the licenses in contradiction to the state constitution’s ban on gay marriage. Moriarty issued his order Wednesday after the U.S. Supreme Court opened the door for same-sex couples to get married in Kansas when it let stand lower-court rulings that found gay marriage bans unconstitutional. The court did not rule on the Kansas law, but let stand an appeals court ruling that would be binding if there was a challenge brought against the state law.

It appears that of the 52 marriage license applications filed thus far in Johnson County, only one has been granted. Equality Kansas reports that the couple married immediately this afternoon.