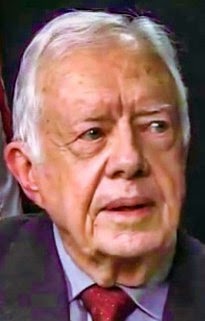 Jimmy Carter: States Should Decide On Marriage, Not The Federal Government

“I’m kind of inclined to let the states decide individually. As you see, more and more states are deciding on gay marriage every year. If Texas doesn’t want to have gay marriage, then I think that’s a right for Texas people to decide. I don’t think that the government ought to ever have the right to tell a church to marry people if the church doesn’t want to. I’m a Baptist, and the congregation of our church will decide whether we have a man or a woman as pastor, and whether we’ll marry gay people or not.” – Former president Jimmy Carter, speaking to a Texas television station. Last year Carter declared that same-sex marriage should be legal nationwide.

Previous PENNSYLVANIA: Murder Charge For Man Who Met His Victim On Craigslist
Next OK Go – I Won’t Let You Down