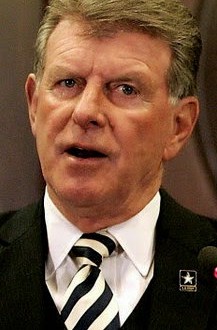 Idaho Gov. Butch Otter announced today that he’s filing a petition with the 9th Circuit U.S. Court of Appeals for an en banc re-hearing of Idaho’s same-sex marriage case. “I will continue defending Idahoans’ self determination and the will of Idaho voters who decided that traditional marriage is a core principle of our society,” Otter said in a statement. He said his office will file the petition later today. An en banc review at the 9th Circuit, because the circuit is so large, would mean that a larger 11-judge panel would re-hear the case, after a three-judge panel made the decision earlier. In smaller circuits, an en banc review is a rehearing by the full court. Otter and Idaho Attorney General Lawrence Wasden earlier requested that 9th Circuit assign a full 11-judge panel to hear Idaho’s case in the first place, rather than a three-judge panel; that request was denied. Wasden is not joining with Otter in today’s petition.

Via press release from Otter’s office.

“I have repeatedly pointed out to the courts that unaccountable judges imposing their perception of social change on the law – rather than public policy being changed through the democratic process – undoubtedly will lead to increased religious strife and restrictions on private property,” Governor Otter said. “For these important reasons, I will continue defending Idahoans’ self-determination and the will of Idaho voters who decided that traditional marriage is a core principle of our society.” Along with defending the critical definition of marriage in Idaho’s Constitution, Governor Otter also highlights in his request for rehearing that letting the three-judge panel’s decision stand will accelerate conflicts with First Amendment religious liberties and pose serious challenges to other portions of Idaho law. The Governor also said he continues to monitor same-sex marriage cases in other jurisdictions and the potential for the issue to be accepted for review by the U.S. Supreme Court.

It’s interesting that the attorney general isn’t joining in.

UPDATE: The Spokesman-Review has added one line to the above story: “Wasden is not joining with Otter in today’s petition. However, his spokesman, Todd Dvorak, said today that Wasden does plan to file an appeal to the U.S. Supreme Court in the coming weeks.”