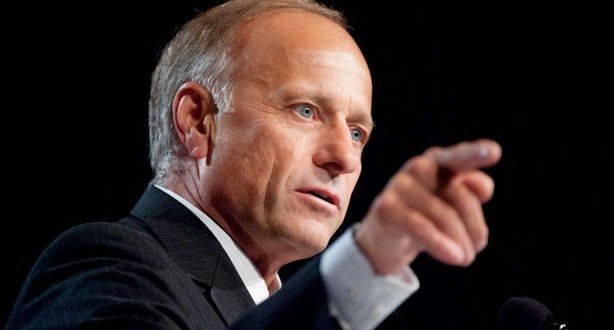 GOP Rep. Steve King: In 2000 Years No Gay Person Has Ever Gone To Heaven

Rep. Steve King (R-IA) is very sure that no gay person has gotten past heaven’s velvet ropes since Doorman Jesus got the gig.

“I would say that what was a sin 2,000 years ago is a sin today, and we need to stick to that principle,” King said in an interview with The Jefferson Herald. The report from the bishops — which at the time of the interview King said he had “picked up little pieces in the news” about — is not a final guiding document, and is expected to generate animated debate in the church worldwide. “I owe it to Pope Francis to read it carefully and read it with precision before I pass judgment on it,” King said. “I would just say that in fact to pass judgment on his document seems a bit presumptuous as I hear myself say that.”

King declined to say whether he thought divorce or cohabitation are sins. “I think that I’ll not comment on that part,” King said. “I’ll just say that what was a sin 2,000 years ago is a sin today, and people that were condemned to hell 2,000 years ago, I don’t expect to meet them should I make it to heaven. So let’s stick with that principle.” When pressed on the people he believed are included in the “condemned” category, King said, “Let me say it isn’t to me to pass that judgment, and those who choose a lifestyle that I’ll say is not one that’s annointed and favored by my faith — or their faith, for that matter — that’s between them and God.”

King is a longtime favorite of anti-gay hate groups.