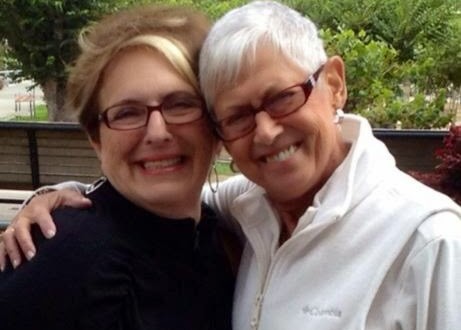 Florida also made history today as Arlene Goldberg and her late wife, Carol Goldwasser, officially became the first same-sex couple whose marriage is respected in the state. US District Court Judge Robert Hinkle ruled on August 21, 2014 that Florida’s ban on marriage for same-sex couples was unconstitutional and – despite a stay on his ruling –ordered the State of Florida to issue a new death certificate for Carol Goldwasser, naming her partner of 47 years, Arlene Goldberg, as her wife. Arlene was first added as a plaintiff in Grimsley and Albu v. Scott when the ACLU filed a motion of preliminary injunction in April asking the court to immediately stop enforcing laws barring legal respect for marriages between same-sex couples.

Today, Arlene received that newly-issued death certificate, making her and her late spouse the first same-sex couple to have their marriage recognized in Florida. “It’s hard to put into words how meaningful this is to me,” said Goldberg. “For 47 years, Carol and I made our lives together, all the while being treated like strangers in the eyes of the law in Florida. It’s bittersweet that Carol isn’t here to share this joy with me, but for the first time in 47 years, our marriage was respected. Our relationship and commitment to each other is finally recognized. ”

“Today is a milestone day for all Floridians but especially for Arlene. As Judge Hinkle stated himself, listing Arlene as Carol’s wife on Carol’s death certificate is about ‘simple human dignity.’ The state has no business denying this dignity—or any of the other protections and responsibilities of marriage—to Arlene or anyone else. The time for marriage in Florida is now, and Governor Scott and Attorney General Bondi need to stop fighting the inevitable.”

The stay on Florida’s marriage ban overturn is due to expire in three months.