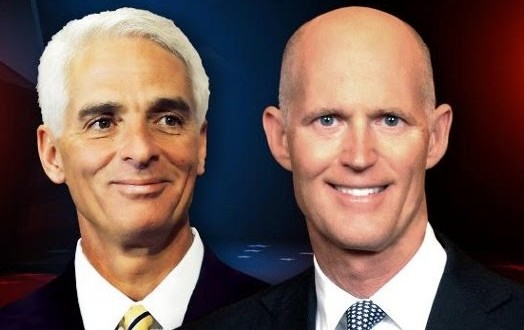 After the bizarre start to last night’s gubernatorial debate, Florida Gov. Rick Scott repeatedly refused to say if he thinks his state’s ban on same-sex marriage is discriminatory.

Scott was asked if Florida’s constitutional ban on gay marriage was discriminatory, but he refused to directly answer the question, even when asked a second time. He did say he supports traditional marriage. Crist said he supports gay marriage. “Who is it for us to tell other people who to love and what is it in our right to tell other people who to marry?” Crist said. Scott then pointed out Crist supported the gay marriage ban when it passed in 2008. “We don’t know what Charlie believes on this issue because he’s taken every side on this issue,” Scott said.

Scott’s debate performance is being characterized as “weak and rambling” even on right wing sites, where the instantly infamous fan incident is being roundly mocked.