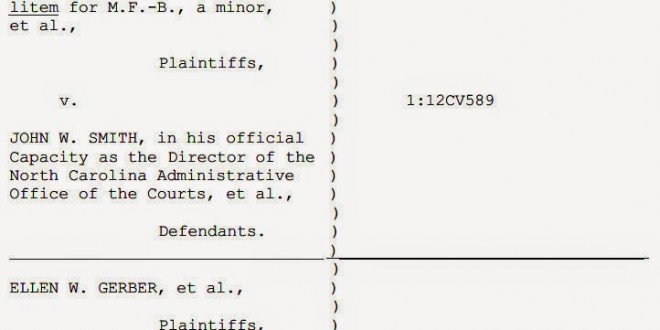 Osteen issued an order granting requests by House Speaker Thom Tillis and Senate leader Phil Berger seeking to intervene in the cases. Osteen’s order follows a separate ruling Friday by U.S. District Court Judge Max O. Cogburn Jr. declaring the ban unconstitutional, triggering a rush of joyful same-sex couples getting legally married. “In reaching this conclusion, this court is not expressing an opinion on the relative merits or demerits of any appeal, only that there is an appeal right that a party with arguable standing and interest has sought to preserve,” wrote Osteen, who was appointed to the bench by President George W. Bush.

But check out this smackdown towards the end of the ruling.

Notwithstanding some of the ongoing cases on a national level, this discussion is merely academic in this court. The United States Court of Appeals for the Fourth Circuit has issued its ruling in Bostic. As recognized by the district court in General Synod, this district court, sitting in North Carolina and the Fourth Circuit, is bound to apply that law. The parties to this case have the right to expect nothing less, whether they agree with the law or not. The issue presently before this court is solely whether to permit intervention for the purpose of preserving and taking an appeal. Although it is a very close issue, this court concludes that the motion to intervene should be granted, but only for the purpose of lodging an objection and preserving that objection to this court’s application of Bostic.