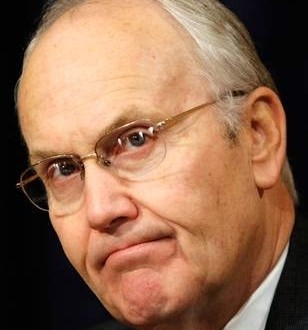 A federal court yesterday ordered former GOP Sen. Larry Craig to pay the government $242,000 in campaign funds that he used to pay lawyers after being busted toe-tapping in a Minneapolis airport restroom. Craig has argued that he was entitled to use the funds because was traveling on official Senate business at the time of his arrest.

Loop Fans may recall our prior analyses of his trip to the bathroom. Best we were able to determine at the time — judging from what sources told us were the usual arrival and departure gates for his flights — Craig may have passed not one, not two, not three but four bathrooms at the airport along the way before choosing the very one that an airport official called “the biggest hotspot” for sexual encounters. But we digress. In the current legal action, Craig argued that Senate rules permit reimbursement for any costs while on official travel. But the Federal Election Commission filed suit, saying Craig converted the campaign funds for personal use in violation of the Federal Election Campaign Act. U.S. District Judge Amy Berman Jackson of the District agreed. “The Court finds that defendants violated the FECA when they converted campaign funds to pay for legal expenses related to Senator Craig’s efforts to withdraw his guilty plea, which was a personal matter that was not connected to the Senator’s duties as an officeholder,” Jackson wrote.

During his 28 years in Congress, Craig voted against LGBT rights every time. He left office in January 2009 with a 0% rating from the Human Rights Campaign. He is now a lobbyist.