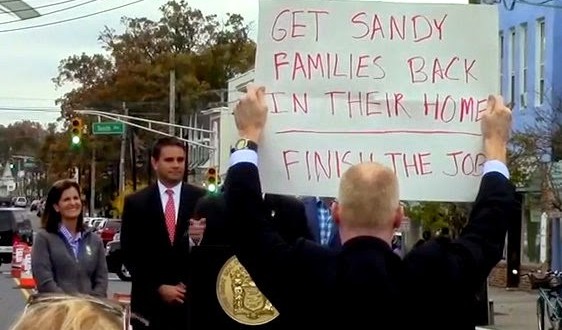 This is why some people love him … and some people hate him. N.J. Gov. Chris Christie, appearing along the Jersey Shore to mark the second anniversary of Superstorm Sandy, got heckled by a local activist and former councilman. So Christie did what he does — fire back. “I’m glad you had your day to show off, but we’re the ones who are here to actually do the work,” Christie said from behind an official podium placed in a Belmar, N.J., intersection. “So turn around, get your 15 minutes of fame and then maybe take your jacket off, roll up your sleeves and maybe do something for the people of this state.” Christie summed up: “So listen, you want to have the conversation later, I’m happy to have it, buddy. But until that time, sit down and shut up.”

Previous Seen In Florida
Next Tim Cook: I’m Proud To Be Gay