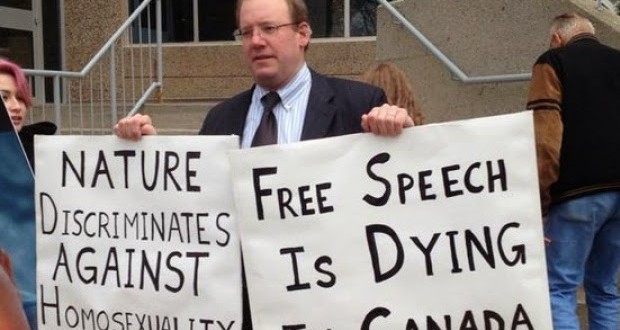 At their trial today, court heard they were asked to leave the campus because their activities violated the U of R’s policy on maintaining a respectful work environment. In the morning, court was packed with their supporters while the Crown’s arguments were presented. The defence presented evidence in the afternoon. LaBarbara and his supporters also protested with signs outside the courthouse before proceedings began. The judge will hand down a decision on Dec. 22.

Defence lawyer Michael Weger argued the men’s initial arrest on the wrong charge was only one of the reasons the current charges should be tossed. He said the mischief charge they are facing contains a number of legal “outs,” one stating that a person can’t be charged if they are attending a place simply to obtain or communicate information.

“Communicating information is exactly what happened on April 14 …,” Weger said. “Isn’t university about different ideas and different viewpoints? As soon as we get to a point when we start sending young adults to an institution that tells them exactly how they must think and what to think, then our students stop getting an education.”

But Fitz-Gerald argued the men were not charged because they chose to communicate information; They were charged because they refused to leave private property after being asked several times to do so and thereby interfered with the lawful use and enjoyment of that property.

“It’s the Crown’s position, your Honour, that the University of Regina owns and occupies that property, that land, (and) it’s uncontroverted evidence before you of that,” he said, adding that the university has the right to direct people to leave under the Trespass to Property Act. “I say the university was completely within its rights to (ask them to leave). Mr. Whatcott and Mr. LaBarbera were not within their rights to refuse.”