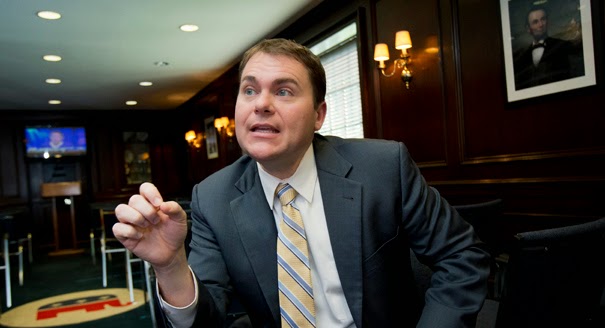 Anti-gay groups hate Democrats, but if there’s anything they hate even more, it’s gay Republicans.  Therefore a coalition of anti-gay activists today issued a joint letter calling for a “tactical vote” against homocon House candidate Carl DeMaio and a vote for the incumbent Democrat, Rep. Scott Peters.

Christian conservatives face a moral dilemma in a key San Diego election race. We know we have a clear choice in voting between the candidates when one of the candidates stands in opposition on issues relevant to the Christian community: life, marriage, religious freedom… Obviously we vote for the candidate who is in-line with biblically based values. But how should we vote when both candidates share virtually the same views, and stand in opposition to those values? Some people choose to simply abstain from voting, out of frustration with both candidates. However, staying at home on Election Day might provide the margin of victory for a candidate who will do far greater damage and harm to society.

Such a race, we believe, calls for a different type of strategy when voting. Rather than sitting out the election, and potentially allowing a candidate who will cause great damage to win an election, we suggest a strategy that we call “Defensive Tactical Voting.” What is Defensive Tactical Voting? Simply this: voting for a candidate who, while doing some damage to society, will do less damage than the other candidate(s) on the ballot. And who will provide a greater opportunity for defeat in a future election. We are aware of the fact that this strategy cannot always be applied broadly, but only to specific races.

An example of such an election is the 52nd Congressional District in San Diego, CA. Two candidates are running: Incumbent Democrat Scott Peters, and Republican Carl DeMaio. Both candidates are pro-abortion and pro-same sex marriage. Both candidates are liberal and “progressive.” Yet one of these candidates will do far more damage to the moral fabric of our society than the other. That candidate: the Republican candidate, Carl DeMaio. Why is Carl DeMaio so damaging as a potential Congressman? DeMaio is an avowed LGBTQ activist (Lesbian, Gay, Bisexual, Transgender, Questioning).

The LGBTQ movement believes in a genderless society, where God’s order of male and female is denied. Their goal is much greater than that. It is to impose their views upon us, with the intent of abolishing our rights to freedom of religious conscience, coercing us to affirm homosexual practice and to forever alter the historic, natural definition of marriage. Allow us to be clear, in court cases all over America, it is now overwhelmingly evident that religious liberty and the radical homosexual agenda can not co-exist. Authentic biblical believers are losing their right to the first amendment expression whenever the homosexual agenda gets its way.

The joke, as always, is on them as DeMaio is exactly the kind of alleged “gay activist” that we do not need in Congress. Among the letter’s signees are Gary Cass of the Christian Anti-Defamation Commission, crackpot Pastor Jim Garlow, “ex-gay” activist Charles Limandri, and two dozen other nutjobs you’ve never heard of.