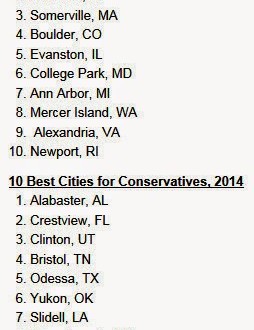 Livability has compiled a list of the best places to live if you are liberal or conservative. Via press release:

Our editors, working with advisory board member Kevin Stolarick, Ph.D, (the founding research director of the Martin Prosperity Institute at the University of Toronto’s Rotman School of Management) and using data from several geographies, gauged the ideological skew of the congressional representation of a city. They utilized nonpartisan watchdog GovTrack’s analysis of the members of the House of Representatives on a conservative/liberal spectrum. Then, using data from Esri, editors looked at how residents of each city self-report their own political leanings on a five-point scale from very liberal to very conservative. The last piece of the political puzzle was the splits in the vote during the 2012 presidential election. In addition, our editors asked Experian Marketing Services to help create a basket of goods — one restaurant, one automotive brand, one magazine, one retailer and one TV show – that are heavily favored by one end of the political spectrum or another. They then backtracked and found areas where people uses those goods and services to a high degree.