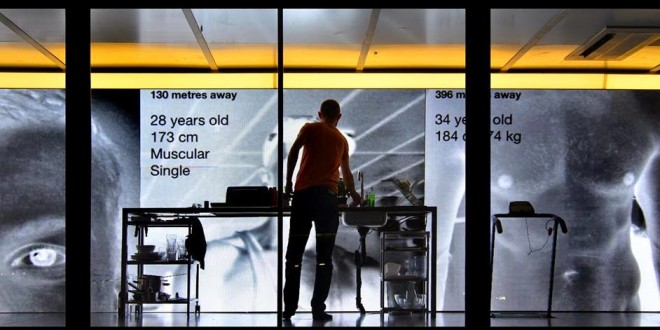 A Dutch artist is sitting in a Berlin gayborhood storefront where he is live-streaming photos and chats with unsuspecting local Grindr users to giant video screens in the window. Some of these men, perhaps unsurprisingly, are furious. Via Gay Star News:

The project is called Wanna Play? But many Grindr users don’t consider the art playful, some consider it to be a gross invasion of their privacy. Others say they have felt manipulated into acting oddly or writing messages that they would never have done if it was being broadcast for the world to see. Parker Tilghman is one of the men furious over the art show. When he started chatting to Verhoeven, they traded pictures and chatted for awhile before he was asked whether he was interested in shaving the artist’s beard. “Given the odd nature of our conversation I comically asked, ‘Are you going to murder me?’ to which he responded, ‘No, but I’m afraid you might be the one to murder me.’ When Tilghman went to the address the artist gave him, standing on the corner of Marienenstrasse, he saw his Grindr chat out there for everyone to see. “Someone involved in the project confronted me and I shouted at him louder than I have ever shouted in my life. The entire block stopped, at one point they started clapping. I screamed, ‘How dare you? You are violating peoples lives, you are publicly mocking people and projecting the pictures and words onto a screen that an entire city block in one of the busiest parts of Kreuzberg for everyone to see.'”

The two-week installation is in its third day and is live-streaming here. At this writing it appears that the screen is turned off.