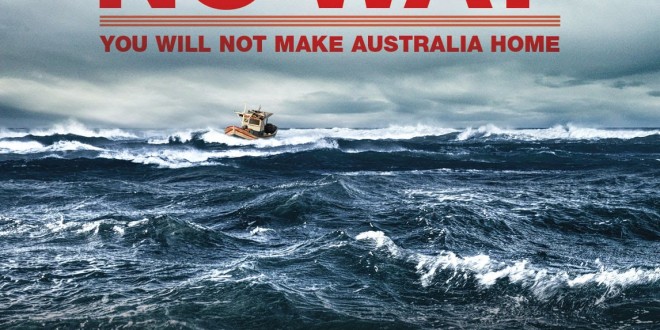 “NO WAY,” the ad declares in bold red letters over an ominous background featuring a small rickety boat on a churning sea. “YOU WILL NOT MAKE AUSTRALIA HOME.” To a tourist in Australia, the ad seems unwelcoming. To its real target—people sailing to Australia to escape the oppression and violence in their home countries—it’s just plain cruel. The blatantly exclusionary ad is part of a campaign by the Australian government’s military-led border security plan, called “Operation Sovereign Borders,” to prevent asylum seekers from thinking they can settle in Australia. “If you get on a boat without a visa, you will not end up in Australia,” the advertisement says. “Any vessel seeking to illegally enter Australia will be intercepted and safely removed beyond Australian waters.” The ad appears in English, Urdu, Dari, Pushto and Hazargi; it also surfaced in Pakistani newspapers on Friday.