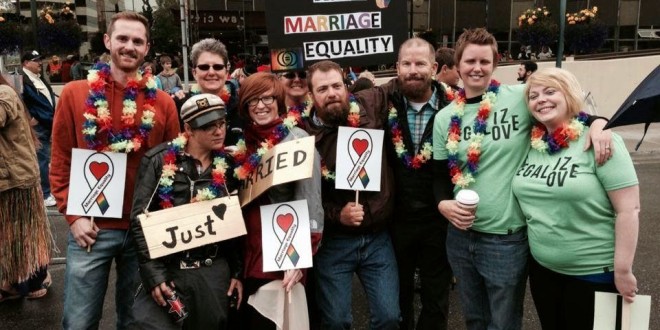 Five couples, one of which wants to marry in Alaska and four others who have already legally wed in other states, filed their suit challenging the ban in May. They sought a summary judgment in August, saying the state’s marriage bans violate due process and equal protection. “Alaska’s marriage bans infringe upon the fundamental right to marry and discriminate on the basis of sexual orientation and gender,” they wrote. In 1998, Alaska voters overwhelmingly pushed through a constitutional amendment that excludes same-sex couples from marriage. The state has argued that it is up to the voters to decide such policy issues saying, “the definition of marriage is an issue for the states and the will of the voters of each state should govern regardless of whether the federal government or a federal court agrees.”

“The state has absolutely not presented any arguments that have not been struck down by the 9th Circuit,” said Joshua Decker, executive director of the America Civil Liberties Union of Alaska, which has filed a friend of the court brief on behalf of the five gay couples. “The state does not have a leg to stand on when it comes to arguing why this discriminatory ban should not be struck down,” he said.

If the state of Alaska doesn’t have a unique argument that wasn’t already decided by the Idaho and Nevada cases by the 9th Circuit, it stands no legal chance of prevailing in the 9th Circuit, said William Eskridge, a Yale University law professor. If the state were to win at the district court level, it would be reversed by the appeals court on appeal, he said.

“If they lose, as they ought to, at the district court level, if they want to take an appeal, the 9th Circuit will summarily affirm and probably very quickly,” he said. Even then, the state would have options. The 9th Circuit decision would be made by a panel of judges, and the state could appeal to the full court to reconsider the Nevada and Idaho ruling or seek review by the U.S. Supreme Court, which seemed unlikely given the court’s refusal to step in Monday. That could change if another federal appeals court were decide such bans were constitutional, thus making different standards in the country.

Decker, with the ACLU, called on Alaska Gov. Sean Parnell to stop wasting taxpayers’ time and money in defending the gay marriage ban. “There’s no ambiguity about what the outcome’s going to be,” Decker said. “The only thing we’re fighting about is when it’s going to happen.”

Above are the plaintiffs. A rally will begin at the Anchorage courthouse at noon.

CORRECTION:  I’m being told the live-streaming will only be seen by the overflow audience outside the courtroom. I’ll try to find reporters who will be live-tweeting from inside.
(Tipped by JMG reader Christopher)