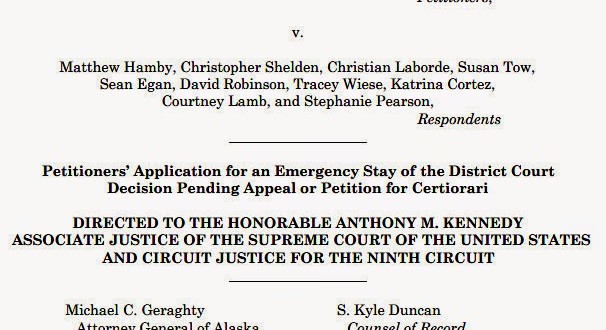 Should the Ninth Circuit decline to grant en banc hearing to reconsider Latta, then Alaska would have strong grounds to seek certiorari before judgment from this Court. 28 U.S.C. § 1254(1). By the time that petitioners’ en banc petition will have been decided by the Ninth Circuit, there is a reasonable likelihood that there will be a clear post-Windsor circuit split over whether the Fourteenth Amendment requires States to license and recognize same-sex marriages. There was no such post-Windsor split when this Court recently denied review in five cases presenting that question, but such a split is likely to develop in the coming months. On August 6, 2014, the Sixth Circuit heard argument on that question in cases from Michigan, Ohio, Tennessee, and Kentucky, and could soon issue a decision creating a split with the Tenth, Fourth, Seventh, and Ninth Circuits. Additionally the Fifth Circuit will soon hear argument in cases from Louisiana and Texas addressing the same issue and could easily issue a decision by year’s end.