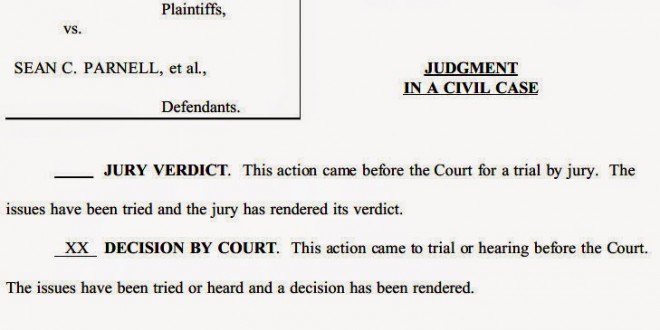 Yesterday Alaska Gov. Sean Parnell asked a federal district court to stop same-sex marriages while he appeals to the Ninth Circuit Court. Tonight the lower court told Parnell to suck it. The final briefs in the appeal are due before the Ninth on February 20th. We can probably expect Parnell to now ask the Ninth for a stay. Same-sex marriage became legal yesterday in Alaska and at least two couples have married after clerks waived the three-day waiting period. Many more marriages should take place on Thursday.

UPDATE: Well, what you know. Parnell has ALREADY run to the Ninth Circuit and demanded a stay pending his demand for an en banc rehearing.

MOTION FOR STAY: State Defendants seek a stay of the District Court’s decision and injunction order finding certain Alaska laws regarding marriage to be unconstitutional under the Fourteenth Amendment. Because of the exceptional importance of this matter, the State Defendants filed an immediate appeal and intend to petition for initial en banc hearing. A stay should be issued because: (a) there is a reasonable likelihood this Circuit will rehear Latta v. Otter en banc, the decision of which the district Court relied upon heavily in its application of heightened scrutiny to Alaska’s marriage laws; (b) there is a reasonable likelihood that a circuit split will develop in the very near future, leading to review by the Supreme Court of the important issue of whether state traditional marriage laws violate the Constitution. For these reasons, the law on which the district court grounded its opinion could continue to be in rapid flux over the next several months, and thus the Court should stay its decision to avoid chaos in the administration of Alaska’s marriage laws pending ultimate resolution of this fundamental issue.

Read the Ninth Circuit stay demand at the above link via Equality Case Files.